Home IELTS IELTS vs. TOEFL: Which Should You Take? 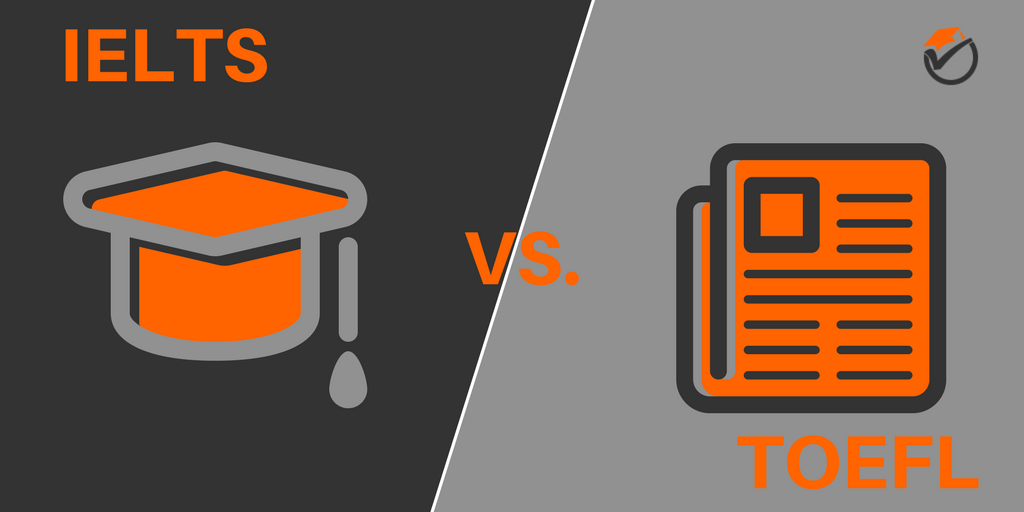 Most English-speaking universities and immigration centers around the world require foreign students to take a standardized English test to judge whether they will be accepted into the university or country. The main exam for American universities is the TOEFL. But the main exam for the majority of British commonwealth countries is the IELTS. It sometimes gets a bit tricky for you to decide between these two options since in some cases you have a choice on which to take. In order to make the correct decision you have to take a lot of considerations into account.

Below we give an IELTS vs. TOEFL comparison table and go over the differences and considerations you need to take into account while deciding between the 2 exams.


IELTS vs. TOEFL: Differences and Comparison

There are many distinctions between the IELTS and TOEFL tests. We will point out these differences in the sections below.

Another dissimilarity between the 2 exams in that the IELTS is significantly shorter in length than the TOEFL. In almost every section the IELTS is only about 2/3rds of the length of the TOEFL. The TOEFL is about 4 hours long while the IELTS is about 2.5 hours, a large difference.

Another major difference is that the TOEFL can only be taken on the computer, while the IELTS is normally taken as a hand-written test. Testing facilities will provide you with a computer and keyboard for the TOEFL, but for the IELTS you will be afforded a pencil and paper.

Also, another key difference between the 2 exams is that the TOEFL is primarily a multiple-choice exam, while the IELTS asks many different types of questions. On the IELTS, you can be asked fill in the back, multiple choice, matching or many other different question types.

The TOEFL exam is much, much more popular than the IELTS. Around the world, it is taken over 10 times as much as the IELTS. Because of this there are many more testing locations and centers that offer the TOEFL. This means that there is more likely to be a testing location near where you live, making it a lot easier to take the exam.

Since the TOEFL and IELTS can be taken all over the world, it is very difficult to compare the costs of both tests. Both exams change the amount that they charge for the test from region to region, sometimes the TOEFL is cheaper, while sometimes the IELTS is most budget friendly.

The 2 exams also differ from each other in respects to how they structure the reading section of the test.

The TOEFL only asks multiple choice type questions. This makes it easy to guess if you do not know the correct answer since you can just randomly guess and get the correct response. On the IELTS they have many different question types like fill in the blank and matching which can make it harder for some test takers.

The 2 tests are also very different in their listening sections.

The biggest difference is the fact that the TOEFL is based mostly on an American accent, while the IELTS has more international English accents. This makes sense since the TOEFL is the primary test in America.

The TOEFL listening passages also include “filler words” like um and er which make the speaking sound more authentic and realistic. In the IELTS no filler words are spoken and the speakers sound like they are reading from a sheet of paper rather than having a conversation.

Also in the TOEFL, all of the conversations normally revolve around university life, so it is a lot easier to infer what is being said from this context. In the IELTS, the conversations can be from any different type of setting or context, so conferring meaning can be a lot harder.

The differences between the 2 tests on the writing section are similar to those that you will encounter on the other sections of the exam.

Since the TOEFL is a computer based test and the IELTS is not, your writing responses will be typed into the computer and not hand written, like on the IELTS. This means that you will need to have a certain level of computer literacy to not give yourself a disadvantage on the exam. Slow typing will give you less time to come up with your response.

The 2 exams also are very different in regards to how they administer the speaking portions of their exams.

The difference above is the main difference between the 2 tests’ speaking portions. The questions that you will face on the speaking section of each exam are pretty similar.

IELTS vs. TOEFL: Which Is Right For You?

Why are you taking the exam?

Most universities and governing immigration bodies only accept one of these exams. Make sure that you check with where you are applying to make sure that you actually have a choice on which test to take.

What English accent are you most used to?

The accent that you are used to conversing in also should play a big part in your decision. Since the IELTS is mostly accepted in British commonwealth countries, the accents the test uses are from all over the world. The TOEFL, mostly used for American universities, uses an American accent for its dialogue passages. Make sure to choose the test with the accents that you are most comfortable with.

Can you sit and concentrate for a long test?

How long you can keep your concentration up will also play a big part on making your decision.

The TOEFL is taken over a half of a day, over 4 hours. The IELTS is more than an hour shorter! This can make a big difference to some test takers that cannot concentrate for that long of a period. Exams like the IELTS and the TOEFL can be very draining because they cover such a broad range of skills, using both sides of the brain.

Make sure to choose the exam that best suits your focus and concentration abilities.

Are you comfortable with using a computer to take the exam?

Your skills with a computer can also play a big role in deciding which exam to take.

Being a slow typist can really set you back on the TOEFL since the writing portion is timed. If you are slow, you may have less time to outline and come up with your response before typing it.

Are you looking for a list of the best prep books for either the IELTS or the TOEFL?